In this post, we'll take a look at the Frank-Wolfe Algorithm also known as the Conditional Gradient Method, an algorithm particularly suited for solving problems with compact domains. Like the Proximal Gradient and Accelerated Proximal Gradient algorithms, Frank-Wolfe requires we exploit problem structure to quickly solve a mini-optimization problem. Our reward for doing so is a converge rate of \(O(1/\epsilon)\) and the potential for extremely sparse solutions.

Returning to my valley-finding metaphor, Frank-Wolfe is a bit like this,

How does it work?

Frank-Wolfe is designed to solve problems of the form,

where \(D\) is compact and \(f\) is differentiable. For example, in \(R^n\) any closed and bounded set is compact. The algorithm for Frank-Wolfe is then,

then take a step in that direction. We can immediately see that if \(D\) weren't compact, \(s^{(t)}\) would go off to infinity.

Upper Bound One nice property of Frank-Wolfe is that it comes with its own upper bound on \(f(x^{(t)}) - f(x^{*})\) calculated during the course of the algorithm. Recall the linear upper bound on \(f\) due to convexity,

For this example, we'll minimize a simple univariate quadratic function constrained to lie in an interval,

This plot shows how quickly the objective function decreases as the number of iterations increases. Notice that it does not monotonically decrease, as with Gradient Descent. 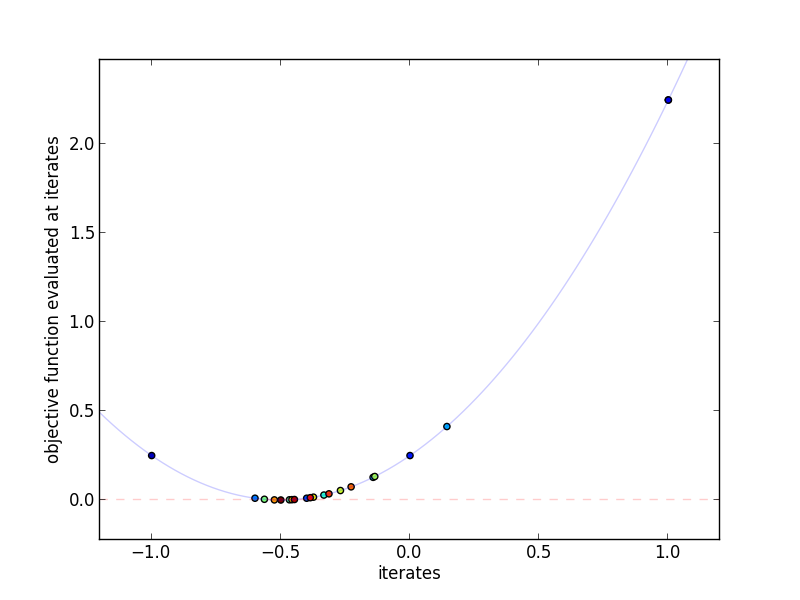 This plot shows the actual iterates and the objective function evaluated at those points. More red indicates a higher iteration number. Since Frank-Wolfe uses linear combinations of $s^{(t+1)}$ and $x^{(t)}$, it tends to "bounce around" a lot, especially in earlier iterations.

Why does it work?

We begin by making the two assumptions given earlier,

Assumptions First, notice that we never needed to assume that a solution \(x^{*}\) exists. This is because \(D\) is compact and \(f\) is finite, meaning \(x\) cannot get bigger and bigger to make \(f(x)\) arbitrarily small.

Secondly, we never made a Lipschitz assumption on \(f\) or its gradient. Since \(D\) is compact, we don't have to -- instead, we get the following for free. Define \(C_f\) as,

Now, we employ induction on \(t\) to show that,

Thus, if we want an error tolerance of \(\epsilon\), we need \(O(\frac{1}{\epsilon})\) iterations to find it. This matches the convergence rate of Gradient Descent an Proximal Gradient Descent, but falls short of their accelerated brethren.

When should I use it?

Sparsity The primary reason machine learning researchers have recently taken an interest in Frank-Wolfe is because in certain problems the iterates \(x^{(t)}\) will be extremely sparse. Suppose that \(D\) is a polyhedron defined by a set of linear constraints. Then \(s^{(t)}\) is a solution to a Linear Program, meaning that each \(s^{(t)}\) lies on one of the vertices of the polyhedron. If these vertices have only a few non-zero entries, then \(x^{(t)}\) will too, as \(x^{(t)}\) is a linear combination of \(s^{(1)} \ldots s^{(t)}\). This is in direct contrast to gradient and proximal based methods, wherein \(x^{(t)}\) is the linear combination of a set of non-sparse gradients.

Step Size The proof above relied on a step size of \(\alpha^{(t)} = \frac{2}{t+2}\), but as usual Line Search can be applied to accelerate convergence.

Approximate Linear Solutions Though not stated in the proof above, another cool point about Frank-Wolfe is that you don't actually need to solve the linear mini-problem exactly, but you will still converge to the optimal solution (albet at a slightly slower rate). In particular, assume that each mini-problem can be solved approximately with additive error \(\frac{\delta C_f}{t+2}\) at iteration \(t\),

then Frank-Wolfe's rate of convergence is

The proof for this can be found in the supplement to Jaggi's excellent survey on Frank-Wolfe for machine learning.

Another cool fact about Frank-Wolfe is that it's linearly invariant -- that is, if you rotate and scale the space, nothing changes about the convergence rate. This is in direct contrast to many other methods which depend on the condition number of a function (for functions with Hessians, this is the ratio between the largest and smallest eigenvalues, \(\sigma_{\max} / \sigma_{\min})\).

Suppose we transform our input space with a surjective (that is, onto) linear transformation \(M: \hat{D} \rightarrow D\). Let's now try to solve the problem,

Let's look at the solution to the per-iteration mini-problem we need to solve for Frank-Wolfe,

In other words, we will find the same \(s\) if we solve in the original space, or if we find \(\hat{s}\) and then map it back to \(s\). No matter how \(M\) warps the space, Frank-Wolfe will do the same thing. This also means that if there's a linear transformation you can do to make the points of your polyhedron sparse, you can do it with no penalty!

Proof of Convergence, Linear Invariance Pretty much everything in this article comes from Jaggi's fantastic article on Frank-Wolfe for machine learning.