In 2002, Latent Dirichlet Allocation (LDA) was published at NIPS, one of the most highly regarded conferences for research loosely labeled as "Artificial Intelligence". The next 5 or so years led to a flurry of incremental model extensions and alternative inference methods, though none have achieved the popularity of their namesake.

Latent Dirichlet Allocation -- an extremely complex name for a not-so-complex idea. In this post, I will explain what the LDA model says, what it does not say, and how we as researchers should look at it.

Let's begin by appreciating Latent Dirichlet Allocation in its most natural form -- the graphical model. I hope you like Greek letters... 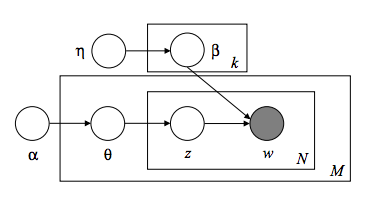 About now, you should have an ephemeral feeling of happiness and understanding beyond anything you've ever experienced before, as if your eyes had just opened for the first time. Do you feel it? No? Yeah, I didn't think so. 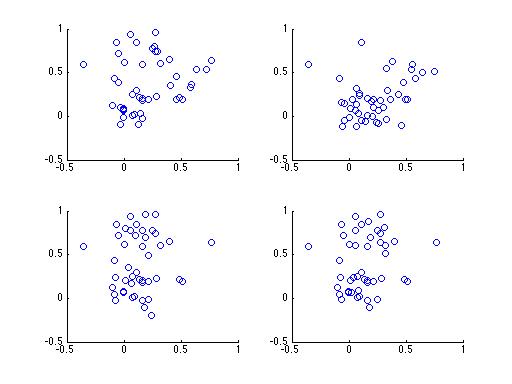 Having trouble? It's a rather difficult problem, especially with only 4 subplots. What if you had a 100,000 subplots instead? Do you think you could figure it out then? Here's a plot of the same data with points colored according to their cluster, 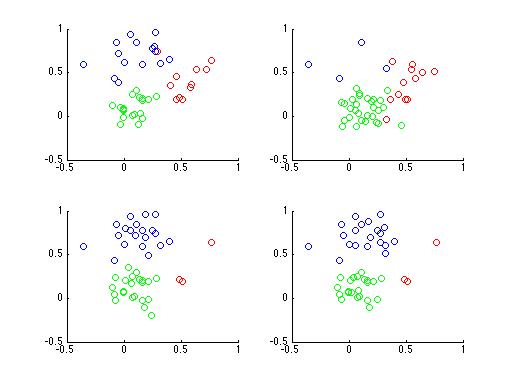 In a mixture model, each data point is sampled independently. The algorithm for generating a sample given the model's parameters is given by the following python snippet.

So how does this relate to LDA? In LDA, each "document" (in our case, subplot) is nothing more than a Mixture Model. The novel part of LDA is that there isn't just one document that we see a ton of samples from, but many documents that we only see a few samples from. Furthermore, each document has its own version of cluster_weights -- our only boon is that all documents share the same cluster_parameters.

To make that concrete, let's look at how we would generate samples from LDA.

Notice that here we don't just return the data point by itself. In LDA, we know which "document" each data point comes from, which is just a little bit more information than we have in a regular old Mixture Model.

Finally, I have to admit that I lied a little. What I've described so far isn't quite LDA, but it's pretty damn close. In the above pseudocode, I assumed that the model parameters were already given, but LDA actually assumes the parameters are unknown and defines a probability distribution over them (a Dirichlet distribution, in fact). Secondly, the examples above generate data points from Normal distributions where as LDA generates samples from the Multinomial distribution. Other than that, you now understand Latent Dirichlet Allocation, the core of nearly every Topic Model in existence.

Here's the MATLAB code for generating the two plots above.